This weekend I put the finishing touches on a science fiction story I've been working on for quite a while, plus a fresh coat of polish on an older fantasy tale that was racking up R's before I pulled it out of my submission pool. So, two more little birds have been released to the wind. Hopefully they'll fly back with good news around their ankles. 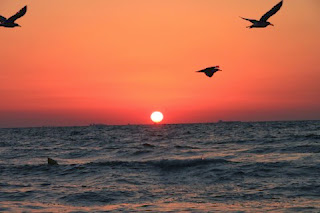 It's quite a feeling to hit that "send" button, knowing someone is going to read your story and judge whether or not it's worthy of their publication. I tend not to get bummed about rejections, but my nerves still tingle when typing up a cover letter. In even the silliest stories, a great deal of myself goes onto the page. Capping off the writing process by sending it out to a stranger for appraisal is like carefully undressing in the living room and then yanking the shades open.

Tomorrow, I'll likely finalize the story from my "THE END" blog and set it free as well, which will make four stories out in the wild. I'm aware that's not a particularly large number; I have some writer friends who have over a hundred stories making the rounds. That seems like an impossibly high benchmark from where I sit now, but I only just began working on shorts at the end of last year. Before then I'd been spending all my time on novels.

After I fell in love with short stories, I temporarily trunked the novel I'd been working on last year (which I was beginning to have doubts about anyway -- more on that in an upcoming entry). I've now refocused and readjusted my Master Plan of Writeritude®. Originally, 2012 was to be The Year of the Agent. Now it's (hopefully) become The Year of the Whole Bunch of Short Sales. I don't have a specific goal for the number of stories I'd like to sell this year, but at the very least, I hope to sell to enough pro markets to qualify for SFWA membership. That will be a big item to cross off the Plan.

Originally, I was going to use this post to test the waters a little on entries about Mixed Martial Arts. MMA is pretty much the only sport I follow religiously (outside of a few major boxing/kickboxing cards a year and the odd jiu-jitsu tournament) and there was a big UFC card last night that I figured I'd write about. But as good as the card was I just found myself preoccupied with writing, so this is what came out. That is, of course, a good thing.

The day will come when this blog devolves into chat about less productive things, however. For instance, I've been enamored with the PC game Star Wars: The Old Republic. Expect rants.

Until then, it's back to the pigeon coop.