In Greek Mythology, the muses were the personification of knowledge and the arts. Born of Zeus, king of the gods, and Mnemosyne, goddess of memory, they were especially associated with music, dance, and literature. 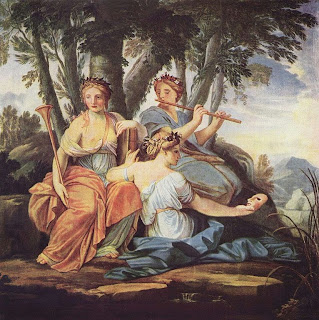 The concept of the muse is so intertwined with the arts that even today we use words born of this association without even realizing it: music, museum, amuse, etc. The concept of a deific being or force that doles artistic inspiration is still taken seriously by some modern artists, though most of us just use the term as a nebulous catch-all for inspiration in general.

For me, the word muse pretty much refers to the subconscious wellspring from which I draw all of my strange ideas. Often I have to coax and cajole the muse into giving me even the smallest nuggets of goodness. Other times, fully formed concepts might slither out of the aether completely of their own accord, often at the most inconvenient of times.

The idea of the muse prayer always intrigued me. Even today, I know some writers who begin their sessions with a plea to the muse. Some of the greatest historic examples of the written word invoke the blessings of one or all of the muses, though often it was merely an indication that the speaker was working inside the established poetic tradition. For example:

Homer, in Book I of The Odyssey:


"Sing to me of the man, Muse, the man of twists and turns
driven time and again off course, once he had plundered
the hallowed heights of Troy."


Dante Alighieri, in Canto II of The Inferno:


"O Muses, O high genius, aid me now!
O memory that engraved the things I saw,
Here shall your worth be manifest to all!"


"Of Man’s first disobedience, and the fruit
Of that forbidden tree whose mortal taste
Brought death into the World, and all our woe,
With loss of Eden, till one greater Man
Restore us, and regain the blissful Seat,
Sing, Heavenly Muse . . ."


"O for a Muse of fire, that would ascend
The brightest heaven of invention,
A kingdom for a stage, princes to act
And monarchs to behold the swelling scene!"


I don't do any praying to the muse myself, but I do believe in the power of ritual (which is what I think muse prayers are really tapping into). I think if you have a specific routine when setting out on a creative endeavor, you can develop an almost Pavlovian response that gets your synapses firing when you need them to. For me, it's as simple as making a cup of coffee and putting my lucky writer hat where I can see it. My subconscious (the muse, if you prefer) knows by now that coffee + desk = writing. For me, this ritual is essential to the process, and anytime I'm asked for advice about overcoming the vaunted and dreadful WRITER'S BLOCK, I always mention this.

I also think it's important to set a schedule and stick to it. The muse will have a much better time of finding you if she knows you'll be at your desk at the same time every day. Of course, you don't have to take my word for it. Just ask W. Somerset Maugham, who said this:

"I write only when inspiration strikes. Fortunately it strikes every morning at nine sharp."


So what about you? Do you ever think about the muse? If so, what does the word mean for you, and how do you go about engaging your muse? Leave a comment and let me know.