Today continues the April A-Z Challenge. This month, I'll be blogging (almost) daily about a different speculative fiction trope, one for each letter of the alphabet. Today's entry is on the Quest.

A brave hero is called to action by circumstances outside of his control. He must embark on a long journey to find an important item, the key to overcoming a great threat. Along the way, he will encounter a wide assortment of creatures and characters, some who impede his progress, others who seek to join his cause or lend him aid in some way. By adventure's end he is weary and worn, every ounce of mettle within him having been tested.

Sound familiar? It should. It's one of the oldest and most common premises in the history of literature and mythology. Practically every culture in the world has works of folklore involving a hero on a quest of some kind, from The Epic of Gilgamesh and his quest for immortality to Argonautica, the tale of Jason's quest for the golden fleece. 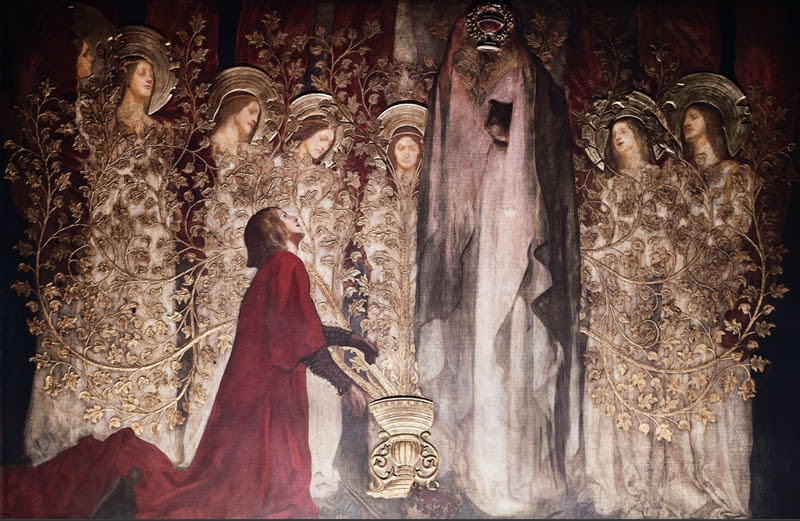 Arguably the most famous of the medieval romances to have seen influence in the fantasy genre is the Arthurian legend of the holy grail.

King Arthur's knights of the round set off on quests to find the grail, which is said to have been the cup Christ drank from during the last supper (alternatively, a vessel used to catch his blood during the crucifixion). Arthur's most trusted knight fails to reach the grail, but ultimately Sir Galahad completes the quest.

A great deal of modern speculative fiction follows the example laid out by these mythological tales. The quest is probably most associated with fantasy, perhaps because this kind of setting allows a more overt telling, with a plucky hero in the mold of the traditional knight-errant pursuing a magical item. The truth though, is this trope transcends genre. It may be more subtle in other settings, concealed more cleverly beneath the narrative, but a surprising number of stories will yield the framework of the quest if you know where to look. It's even described as one of the "basic plots" in Christopher Booker's Jungian analysis of storytelling, The Seven Basic Plots: Why We Tell Stories.

I've not gone out of my way to emulate any mythic quests in my own writing, but the trope is so basic and effective that much of my work has featured the trope unintentionally in one way or another. The protagonist of every good story needs proper motivation, something to strive for, and it can't be something easily obtainable. It is tremendously easy for this basic necessity of storytelling to morph your work into a quest tale, regardless of setting or genre. Despite this, the formula rarely gets old in the hands of a good writer.

Perhaps the quest is so prevalent because it speaks to us on a primal level. From the moment we are born, we are struck with near-constant desire. We need, we want, we yearn. As we traipse through life, these aims grow a little grander, a little bolder. But, there's always another grail to reach for. We're all questing for something.