Looking Back on the A to Z Challenge 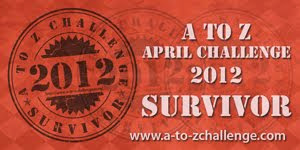 When I began this experiment (only a few months ago, as crazy as that seems), I planned on coming up with a regular update schedule that wouldn't severely impact my writing time. My intention was to post once a week, occasionally twice.

Less than a month later, I signed up for the A to Z Challenge on a whim, dooming those plans for the month of April.

Now it's behind me, and despite the cut it made into my usual writing marathons, I'm glad I did it. It was worth it. It was nice to prove to myself that I could keep a breakneck blog schedule without much prep time beforehand. I made a commitment to post every entry on time, without sacrificing the length or quality that I've tried to hold myself to in previous entries. It got rough there for a while, especially toward the end when I was feeling a bit of blog fatigue. But I think AuthorAlden.com benefited greatly from the work I put into it while riding the A to Z crest. I've gained a new blog series that will continue in the future (see below), I generated more content in that one month than in all of my previous entries combined, and my follower count more than doubled, as did the number of blogs that I'm following. Not too shabby, eh?

I really enjoyed working with the theme I used for the A to Z Challenge, and since some of you seemed to have liked it as well, I've decided to make it a monthly feature. Starting in June, the first Monday of every month will feature a new post in the Speculative Fiction Tropes Series. I've added a button on the navbar that leads to a directory of every post in the series, in case you missed any. I hope those of you who enjoyed my A to Z entries will continue to follow along. It should be much easier now that I'm not restricted by the alphabet!

And one last order of business before I leave the A to Z Challenge behind until next year. I'd like to give a special thanks to some of the people who were along for the ride with me, some of whom I wouldn't have met without the A to Z. Whether they were tackling the challenge themselves or just leaving me encouraging comments, these are some of the folks who helped me along, whether they knew it or not. Give them a visit (in alphabetical order, of course):


And a huge thank you to everyone else who's taken the time to give my blog a read since I started this thing, especially my followers and subscribers. There's too many of you to list, but you have my sincerest appreciation.

Email ThisBlogThis!Share to TwitterShare to FacebookShare to Pinterest
Labels: a to z challenge, authoralden.com, blogging