10 Bruce Lee Quotes That Can Improve Your Writing 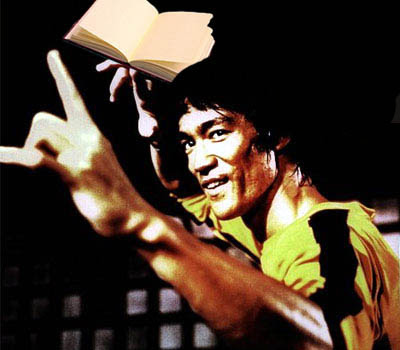 When I was a child, the movies Enter the Dragon and Bloodsport instilled an obsession with martial arts that still lives in me today. These days it manifests itself mainly through my love of combat sports, but those early heroes still hold influence on me. One such legend is Bruce Lee.

I doubt I need to tell you who Bruce Lee is. He was one of the biggest pop culture icons of the 20th Century, starring in (and in a few cases, writing and directing) some of the most memorable and influential martial arts films of all time. What you might not know however, is that he was also a philosopher, incorporating his views on life and self-mastery into a distinct martial arts style of his own creation that is still taught today, Jeet Kune Do. He believed that the commitment to passion, discipline, and determination necessary to master the martial arts could be taken away from the context of fighting and applied to just about any aspect of life. As an instructor, he didn't just teach his students how to kick high or punch hard--he taught them how to carry the things they learned in the gym into their daily lives.

When you think of writing advice, it's probably not very likely that his is the first name to pop into your head. But when you read the ten chunks of wisdom that follow, that may change. Most of these quotes were originally about martial arts or life in general, but I think they have tremendous value for writers.

One mistake that a lot of new writers make is to flaunt their vocabulary at the reader. I once encountered someone on a writing message board who exclaimed, "I don't care if it turns my readers off. They should aspire to reach my level of vocabulary." If that made you facepalm, we have something in common!

While I believe continuous work on your vocabulary is essential for wordsmiths, the point is to expand your palette. You want as many tools in your toolbox as possible, so that you know the right word at the right time, not so you can beat your poor reader over the head with big words.

#2. "Notice that the stiffest tree is most easily cracked, while the bamboo or willow survives by bending with the wind."


Every time a rejection letter lands in my inbox or someone criticizes something I wrote, I do my best to bend with the wind. Don't be one of those authors who feels the need to rebut every negative comment or review that your work receives, whether you're just starting or you've been doing it for decades.

Will there be people who take the wrong impression and jump to the wrong conclusions with your work? Of course. But stiffening up to those people won't help you, especially in the internet age, where your words may come back around to haunt you. The best possible thing you can do is take it in stride. Focus on why the comment was made rather than whether it's "right" or not.


#3. "Take no thought of who is right or wrong, or who is better than. Be not for or against."


Something that's always bothered me is the amount of "teams" there are in the writing world. Literary versus genre, novels versus shorts, self-publishing versus trade publishing . . . isn't it all a little silly? Don't we have something better to spend our time on? Writing, for instance?

We writers have quite enough stacked against us without drawing lines in the sand amongst ourselves. Success in this industry is damn hard to attain. I say we stop all the bickering. Let's focus on building each other up instead of tearing each other down. I reckon we'll all be made better for it.


#4. "Always be yourself, express yourself, have faith in yourself. Do not go out and look for a successfull personality and duplicate it."


It's very tempting to take a look at the best seller list and think to yourself, "I could have written that." And that's not necessarily a bad thought. Hell, it's probably been the reason a lot of people pick up the pen in the first place. But be careful when entertaining the thought of emulating someone else's work and style, whether it's the current trend or the all-time greats.

I'm not saying you shouldn't welcome influence from authors you admire. Not only is that a good thing, but it's pretty much impossible to avoid. But I think you should work to develop your own style as a part of that process. Don't just model your writing after your literary heroes--add their influence to the foundation of your own unique voice. It's a process that will take years (I'm still working to find my own), but I think it's damn important.


#5. "If you put limits on everything you do—physical or anything else—it will spread into your work and into your life. There are no limits. There are only plateaus, and you must not stay there; you must go beyond them."


It's much easier to say the words "don't limit yourself" than it is to actually put it into practice. After all, we often limit ourselves without even realizing it. But one thing I've noticed is that a lot of new writers limit themselves before they even make it out of the gates.

Many will often hesitate to even call themselves writers. If you make the effort to sit down and yank some words out of the aether on a regular basis, you are a writer. You don't need to get a paycheck or see your name in print to earn that title. You earn it by writing. By refusing to grant yourself this, the most basic descriptor of what we are and what we do, you are telling yourself that you're not ready to do this for real. If that isn't a self-imposed limitation, I don't know what is.


#6. "A goal is not always meant to be reached. It often serves simply as something to aim at."


Every time I sit down to write, my goal is not to peel myself away from my work until I've written at least a thousand words. Now, I'm going to come clean and give a shocking admittance: I don't always meet that goal. Don't get me wrong, there are some days when I soar right past that marker and keep going. Sometimes I double it. But there are other days when I struggle to get even halfway there.

When that happens, I don't beat myself up. It's simply not productive. That thousand word goal is important, but the real objective is not to meet some arbitrary word count, but to get my butt in that chair every night. As long as that's accomplished, I've held my end of the bargain, even if the muse didn't hold hers.


#7. "It's not the daily increase but daily decrease. Hack away at the unessential."


This quote may contain the most obvious potential for application to writing in this entire entry. Have you ever heard a more succinct expression of the editing process? "Murder your darlings" comes close, but Lee's words strike at the heart of that essential piece of advice.

Be absolutely ruthless with your red pen when it comes time to whip your work into shape. Every word should serve the plot, characterization, or theme of your story. If it doesn't, it's useless fluff--no matter how well written and no matter how much you love it. It must go. Lower the axe.


This is a pretty obvious one as well, but it's not just about procrastination. There's an old thought out there that occasionally floats to the surface of the literary world that says you must have a certain level of "life experience" before you can expect to craft any work of merit. Hogwash.

I don't know about you, but ever since I learned how to speak I've had something to say. But I'm a pretty quiet guy, so I write. The forward march of time is callous and unforgiving. Don't put your writing on the back burner, ever. Don't wait for "the right time" to tell your story, whatever that may be. The right time is now.


#9. "If you spend too much time thinking about a thing, you'll never get it done."


This is something that a lot of writers seem to fall prey to, myself included. Whether it's reading about writing, talking about writing, meditating on the craft, or even worldbuilding, sometimes I just spend too much time thinking about writing instead of actually putting my butt in that chair.
Don't mistake me; there's nothing wrong with any of those activities. I can't tell you how much I've learned by reading great advice from my mentors or having great discussions with my peers. But you know what else has made me a better writer? Writing.

#10. "Obey the principles without being bound by them."


This one's huge. One of the best pieces of advice I've ever been given is "know the basics," and I pass it along every chance I get. As a writer, you owe it to yourself to educate yourself on the building blocks of the craft, from basic grammar to the advanced tenets of style. It can be a bit overwhelming at times, but the stronger your foundation, the stronger your end result.

This doesn't mean, however, that you must handcuff yourself at every turn. A surprisingly large chunk of the craft is subjective, even at the mechanical level. The better you familiarize yourself with the mechanics of style, the more freedom you will have to ignore the rules when it's appropriate. When executed correctly, this can be a powerful tool in itself.

There you have it. I hope the next time you're channel surfing and you come across a kung fu movie marathon featuring ol' Bruce, you won't just roll your eyes at the terrible voice dubbing and hokey sound effects. I hope you'll think about writing. I'll leave you with a bonus quote from a martial artist of a different kind and different era. I think this is a suitable place for it.


"If you know the Way broadly, you will see it in all things."