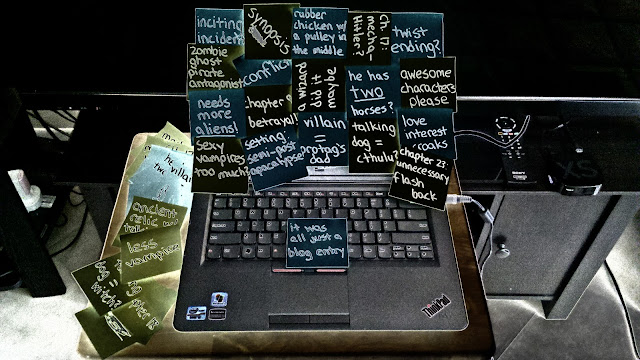 Whether you're a fiction noob or a salty veteran, if you've read some books on the craft or done any poking around on the internet, chances are you've noticed two main schools of thought when it comes to approaching a project. There are those who believe it's best to plot the course of their work ahead of time, laying out the skeletal framework of the story before cutting into the first draft, and those who believe this approach is too restrictive, opting instead to dive right in and let the muse pull them along by the seat of their pants.

One of the primary reasons I decided to delve into short fiction some time ago was for the freedom to experiment without an intimidating commitment to a longer work. This has allowed me to try a variety of approaches to writing in a relatively short time, and both methods have birthed stories I'm fond of. That being said, when the day comes that I decide to sit down and write a novel again, I will most likely be using an outline. I could fill an entire entry talking about my reasons, but at the end of the day, every writer is going to have to decide which method works best for them. Neither will bring universal success for everyone. We're all different.

And that's why it gets my hackles raised whenever I hear someone saying their way is the right way, and everyone else should follow suit. There are pontificators on both sides, but most of the nay-saying I've seen has been aimed in the direction of outlines. Maybe it's just my own experience, but there seems to be a lot of "pantsers" who feel the need to justify their approach, usually by pointing out perceived negatives of the outlining process. Of course, there's nothing wrong with explaining why something doesn't work for you. But I've noticed a lot of myths and untruths being thrown out there. So, as someone who's put both methods to the test, I thought I'd put on my mythbuster hat and address some of them.


This is probably the most common myth cited, and it's absolutely untrue. The outline itself is an expression of your creativity. It's the kick-off to the creative process. And once you're knee-deep into your first draft, the presence of that outline isn't going to make the muse abandon you to the wolves. The same creative mind that produced the outline is on board with you for the entire ride, and you should be putting it to work every step of the way, outline or no.

More importantly, your outline is likely to leave plenty of room for exploration. Your story is not a sterile office building constructed from a two-dimensional blueprint. It's a vast, unexplored cave. That outline is just the dim, stuttering flare that you toss in before commencing your spelunking. It lights just enough of the path to keep your feet moving, but you still won't know for sure what’s around the next bend—or what’s going to leap out of the shadows.

#2. You are Handcuffed to Your Outline


A big source of the doomsaying that revolves around outlines seems to be this strange idea that once you've written one, the work ahead of you is set in stone whether you like it or not. This is so far from the truth that I'm not even sure which angle to attack from. As long as the pen is in your hand, your story remains malleable, and if it wants to go somewhere contrary to your plans, the author is always free to let it roam. Sometimes the finished product won't even resemble the initial outline.

This isn't a bad thing, and for outliners it often prevents the need for a comprehensive rewrite the second time through. You can hold that original outline up to the work in progress and gauge how far off course you are, examining the reasons why. The outline can be edited and adjusted just as readily as the first draft itself, avoiding plot holes and inconsistencies.

I suspect this myth is related to the previous two. Some pantsers just seem accustomed to the idea that their method is the only way a story can truly take on a life of its own. Many writers will often speak of that feeling you get when your characters are fleshed out to the point that they feel alive. They start to feel like real people with their own thoughts and motivations, and might even resist your plans for them. There are differing opinions as to how far the writer should let them play about, but the feeling itself is pretty common, and it's not exclusive to those who write without an outline.

In fact, I'd even argue that it can sometimes happen sooner with outliners, or at least it has in my experience. The reason for this is that when you engage in heavy planning before your story begins, you've already gotten to know your characters to a certain degree. Many of them come to life in the planning stage, and by the time you start writing your story, they're already alive and kicking. This idea that outlined characters are just lifeless puppets couldn't be further from the truth.


Someone once argued to me that the reason I shouldn't outline my stories is because once I put my idea down on paper, it will have lost something to the void of the empty page. By the time I get to my first draft, they said, that initial spark of inspiration will be long gone, wasted on the outline instead of the story itself. My first draft would really be my second, prevented from living up to its potential. I asked this person if they'd ever finished anything longer than a flash piece, and they outright refused to answer.

Putting aside the fact that this claim obviously reeks of superstition (I have a few of my own, after all), it still kind of baffles me that someone would think this way. Not only do I disagree, but I feel pretty much the opposite. The very moment I get a good idea, it goes down on paper, lest it be lost forever to the all-consuming emptiness that is my short-term memory. If you can only capture inspiration properly in the first draft, how on earth do you tackle the second? Heaven forbid you attempt a rewrite. I'm a pretty big believer in the muse (or the "muse-brain" at least), but I am not a slave to my own inspiration. The muse works for me, not the other way around.

#5. There Is a "Right Way" to Plot Your Outline


Finally, we end with a myth propagated not by the detractors, but by outliners themselves. If you're interested in giving outlines a try, there are quite a few tried and tested methods out there, from index cards to mind maps to snowflakes. Chances are you'll have to do a bit of experimentation before you find out what kind of outline works for you. Personally, I prefer a rough sketch of scenes in a simple word processor document. The longer the work is, the closer I tend to drift towards the index cards.

But the way you outline your story is not what matters. Again, everyone is different. What's important is that your outline serves its purpose. That is, it should get you writing. More importantly, it should keep you writing. Be wary of anyone who claims their method is infallible and universal. If you take anything away from this entry, it should be that. No one has all the answers. Find what works for you.
at October 15, 2012