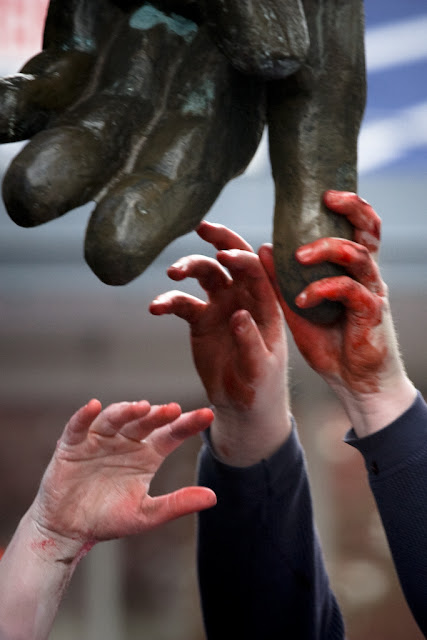 One of the most popular exercises some writers like to utilize when crafting new characters for a project is to write out a mock interview. The writer will ask the character about everything from their hopes and dreams to their favorite food, all in an effort to get inside their head and gain a better understanding of the personality and motivations within. But have you ever tried asking your characters about you? If you did, what do you think they'd say? What would happen if your protagonist was a real person? How would they react if they found out that you were behind every beat of their heart, every turn of their world? Would they thank you? Would they bow down and worship you as their lord and creator?

I can only speak for myself, but I'm fairly certain every last one of mine would try their damnedest to wrap their figmental hands around my throat and snuff the life right out of me. You see, I haven't exactly been kind to the denizens of my little multiverse, especially my protagonists. My stories inevitably become sheer hell for most of them, as they stumble along through one calamity after another, dancing to every sadistic whim that emerges from my imagination. I once participated in an exercise for a writing workshop that had me write a small piece in which one of my main characters introduced me to the rest of the group. It didn't turn out the way I expected. Tasked with describing myself from that poor fellow's point of view, I ended up putting myself on trial. The character cast himself as prosecuting attorney, characterizing me as the devil incarnate, wielding not a pitchfork but a pen. You know, I honestly can't say I blame the guy after all I've put him through.


But what else can I do? I have a story to tell. And I can't bore my readers by spoiling my characters. One of Kurt Vonnegut's famous rules for short fiction is that every character should want something, even if it's only a glass of water. But you can't just let them reach out and grab it. You've got to let them parch for a while. Put that glass on a rooftop and give them a broken ladder. Put it at the bottom of a viper pit. In fact, in one of the rules that follows, Vonnegut encourages writers to be sadists. "No matter how sweet and innocent your leading characters, make awful things happen to them—in order that the reader may see what they are made of," he says.

In other words, character adversity is one of the most fundamental pieces of groundwork in a compelling story. It provides the lion's share of drama and tension that keeps the audience on the edge of their seat and won't let them look away. We don't root for John McClane in Die Hard because he shoots all the bad guys and rescues the girl. We root for him because he has to fall down a flight of stairs and walk barefoot on broken glass to do it. Would we still love The Lord of the Rings if Mount Doom had been in Frodo's backyard the whole time? Of course not. The real story isn't just about a magic ring—it's about that harrowing journey to Mordor. By the end, the reader feels just as battle weary as the broken fellowship.

So the next time you're about to bring the hammer down on those poor, unfortunate characters of yours, do not hesitate. Turn away with a callous heart when they look up at you with Bambi eyes and question your cruelty. They may not deserve the beating you've given them, and they certainly didn't ask for it, but if you are their god, then the reader must be yours, and the satisfaction of the reader is wrought by their tears. They must suffer for the sake of your story, perhaps even give their lives for it. And if they curse you for that, you know you've done your job well.

I'll leave you with one of my favorite quotes of all time, from Nobel laureate André Gide:

“What would there be in a story of happiness? Only what prepares it, only what destroys it can be told.”