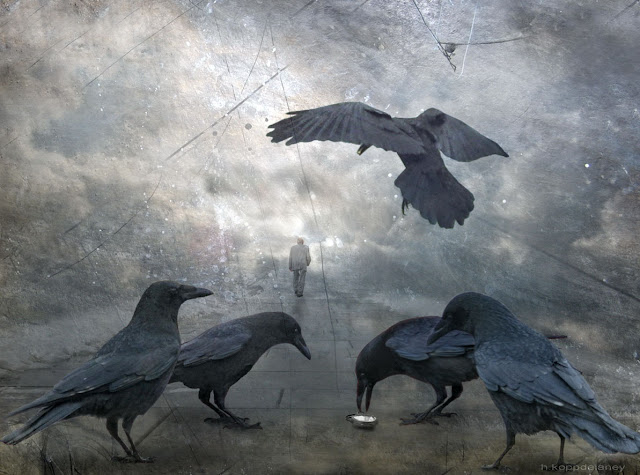 Last year, I began a pseudo-series here on the blog called "Ruthless Writing," with entries on torturing your characters and murdering your darlings. I use the word "pseudo" because the entries in this series are largely spontaneous and unplanned, but a great deal of topics fit under the umbrella of writing ruthlessly. And as I've said in those past entries, I think the term perfectly describes the mindset I aim for every time I sit down to write. The path to success is paved with ruthless habits.

That doesn't just mean leaving creator's bias at the door when attacking your manuscript, though. That same ruthlessness can also be put to work when it's time to reach inside yourself and pull that story out to begin with. It's been said that our dreams fuel the stories we tell, but I think a good old fashioned nightmare can be just as compelling if you're willing to delve therein.

You might assume I'm talking about writing horror, but it's actually much broader than that. While nightmares can be an obvious source of inspiration for scary stories, your inner fears can be put to work in just about any genre, if you can find a way to harness them.

What Are You Afraid Of?


The first step, of course, is shining a powerful spotlight into the recesses of your mind, finding out where those innermost fears of yours are hiding. It might not be as easy as you think; while most of us probably have no problem identifying the obvious surface fears—like the squicky feeling you get when faced with something that creeps or crawls—some things lurk much deeper within the psyche. That's why it's useful to make a distinction between fear and anxiety, as they often come from two very different places. But in my (mostly uneducated) opinion, they are two sides of the same coin.

The raw, instinctive emotion that we tend to think of when discussing fear is generally caused by an outside threat or force of some kind. This external stimulus usually triggers the fight-or-flight response, and a whole host of physical reactions occur, from adrenaline dumps to accelerated heart and breath rates. This is what you feel when you're threatened by physical danger of some kind, and it kept your ancestors alive when they had to worry about being eaten by giant cats if they got too sloppy.

Anxiety, on the other hand, generally involves a broader spectrum of psychological and physiological responses, depending on the person and the circumstances. It usually means a general feeling of concern and unease, but can run the gamut from simple nervousness all the way into a genuine fear response. Causes range anywhere from the daily stresses and demands of life to the deeply ingrained insecurities brought on by external factors like social pressure. There's a good chance you know someone who suffers from an anxiety disorder, as it's one of the more common forms of mental illness. These feelings kept your ancestors alive too, but it was because they were worrying whether or not they'd gathered enough twigs and berries to make it through the winter.

Put Your Id to Work


Once you've acknowledged the existence of your fears and anxieties, as well as the differences that comprise each, you can get to the work of injecting them into your stories. Both can be employed to great effect, depending on the kind of story you're telling. Let's take a look at those two (admittedly broad) categories we've carved out.

Fear with a capital "F" is the most obviously applicable of the two, since it relies almost wholly on external stimuli. This is where your antagonistic force comes in, threatening the well-being of your protagonist (and by extension, the reader) in some way. If you're writing horror, this might be a supernatural force out for aimless vengeance, menacing your poor protagonist with the threat of the unknown. Or perhaps it's a homicidal maniac that stalks them throughout the course of the book, building up to one terrifying confrontation in which the axe is finally raised.

If it's a fantasy world you're toiling in, you might tap into your inner arachnophobia when it's time for your hero to battle it out with the giant spider that stands in their way, transferring your own disturbed state onto the character as you envision every frightening, arachnid feature. How will your characters react to the fight-or-flight response when it kicks in? Will they run the other way or draw their sword and plant their feet? What will the reader learn from this, both of the characters themselves and of the antagonists? Think about these questions, and how best you can use the answers to manipulate reader reaction. Having your characters face their fear is a great way to reveal what makes them tick.

Anxieties are an even better avenue for revealing character, however, since so much of it involves inner struggle of some kind. More importantly, almost every one of us knows what it's like to engage those kinds of problems at some point in our lives. Whether it's stress or insecurity, we've all been there, and we all know how powerless those emotions can make you feel if you let them get the better of you. You might have your romantic protagonist falter in the presence of a love interest, for example, because he or she is insecure about their appearance in the same way you are. Or perhaps the personal stakes they're facing threaten to outweigh the perceived importance of the task at hand, forcing them to make a tough decision. These kinds of internal dilemmas can make a compelling character instantly identifiable, even  if the circumstances aren't quite the same for the reader as they are for you. If portrayed well, conflicts like these can even serve a therapeutic end, for reader and writer alike.

So the next time you're tugging at that brain of yours, trying to shape the conflict in your work into something compelling and gut-wrenching, don't be afraid to look in the mirror first. Take a long, honest assessment of yourself, and take inventory of the dark things that lurk in the back of your mind. Not only will you get a better story out of it, but you might be better off having faced that part of yourself down. And don't just conquer that Cimmerian part of your id; put it to work. Exploit it.