Prepare your earholes! I am attacking you with audio on two fronts this week.

Last week, the Writers of the Future publicity machine began churning, giving me a taste of things to come. Articles about my win ran in some local newspapers, which made for some fun scrapbook fodder. My wife and I had an adventure tracking down a copy of The Lake Worth Herald on a rainy Sunday this past weekend, which led to us stumbling upon the paper's offices and meeting the friendly editor.

I also had my first ever radio interview, with Larry Whitler & Robin MacBlane on WOCA in Ocala, FL. I had some nerves going in, but they made it easy for me. Other than a slight over-enunciation of a word or two on my part, I think it went great. I hope I can come back and chat with them again after the gala.


In other news, my story Child Soldier was featured on Beam Me Up! this past week. Beam Me Up! is broadcast on WRFR in Rockland, ME, but also exists in podcast form, so you can listen online. Child Soldier is a short story about a war veteran's encounter with a young boy affected by the conflict. It was originally published in Daily Science Fiction in 2013. 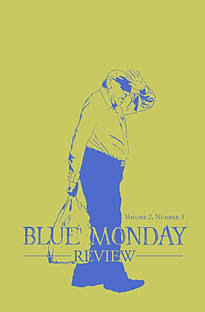 Möbius, a flash piece about an obsessive time traveler that I wrote during my time at Odyssey Writing Workshop, is reprinted this month in Blue Monday Review.

I've written a lot of flash fiction over the past few years, but I think this one is my favorite, so I'm happy to see it find another home. It was originally published in Nature, back in November of last year. You can read the blog post I made back then if you'd like some insight into the frantic writing process that bore this story. You can also read the guest post I made on the Nature Futures blog about the story's inspiration.

Blue Monday Review is a quarterly literary magazine that publishes prose, poetry, and art that embodies the work of Kurt Vonnegut. You can pick up a copy in print or PDF format.