Money Flows Toward the Creator 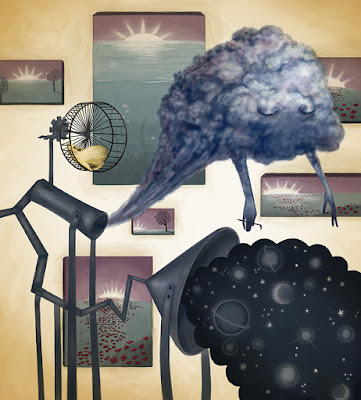 For the past few months, my fiancee Autumn and I have been posting sporadically to a shared blog called Pictures and Prose. Most of our posts have been light and casual, but when we first had the idea, we wanted to spotlight some of the conversations she and I have about our creative pursuits and the industries that wrangle them. Writers and illustrators have a lot of shared goals and professional overlap, so we thought this might be interesting to some folks.

This morning, we posted our first entry like this. It's a little long, but we hope it's an interesting read. It's about something many of my writer friends will be familiar with: Yog's Law, the idea that money should flow toward the writer (or creator), never away. In other words, unless you're self-publishing, you shouldn't be paying upfront for most publishing services. If someone asks you to violate this rule, it's probably a big red flag.

As a writer, I enjoyed hearing Autumn's take on this as an illustrator/artist. Unfortunately, it sounds like the art world is full of just as many predatory actors as the publishing world, if not more. And a lot of young artists find their coinpurses turned over by people claiming to help.

Here's an excerpt from the entry:

James: There’s an axiom science fiction and fantasy writers refer to called “Yog’s Law.” The name comes from an old internet handle used by author James D McDonald, who came up with it. Yog’s Law states that money flows toward the writer. Never away. In other words, the writer should never pay upfront for services necessary to the publishing process (at least not in the traditional publishing model–indie publishing is another story, since you’re playing the role of publisher, as well). When a writer gets an agent, for instance, they don’t pay the agent for their services. The agent takes a cut from the sale of the writer’s work to a publishing house (usually 15%) after the ink is dry and the check for the advance has been cut.

The reason Yog’s Law is passed around is because it’s a helpful rule for new writers to remember to avoid being taken advantage of. If I know money flows toward the writer, then I’m going to hear alarm bells in my head if anyone comes to me with their hand out. Because if it breaks Yog’s Law, it’s probably a scam. It’s probably a predatory business trying to take advantage of someone new to the industry–someone they hope doesn’t know any better.

But I don’t see why the law should cover just writers. Why shouldn’t artists of all stripes demand this kind of treatment? Why not say money flows toward the creator? We’re the “starving artists,” after all. We don’t have the money! We need to be paid for our work before we can turn around and dole it out. And we should be. Our work has value.

But Autumn, I know you’ve told me before that in your experience, the art/illustration world is a bit different. There’s a different culture, where it seems more acceptable, if not normal, for people to take your money.

Autumn: I think the art world can be very predatorial in that regard. There are a lot of people who convince young artists to throw money their way. I think part of the reason they get away with it is because the mindset of shelling out money starts before even setting foot into art college.  Art supplies aren’t cheap, but you can’t start without them.  Before you start applying to art school, you need a portfolio; the more mediums you display, the better your chances of being accepted–which means buying more supplies for each medium.  Many students also pay for pre-college classes to help them better their portfolios. Once you are accepted to a college, you need to borrow money and go into debt (unless you come from a wealthy background).

When you’re fresh out of college, no one knows who you are. No one knows if you’re good or not, if you’re responsible, if you’re worth their investment. Then if you have trouble getting an honest agent who will find work for you, it can lead to a sense of desperation. That’s when a lot of predators will step in with their hands out, promising you the world. Some of those people even call themselves agents, whether it’s accurate or not.


To read the rest, head over to Pictures and Prose!